Fooding Adventures in the Village 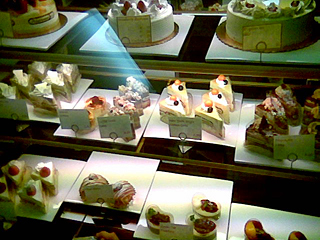 Yesterday I had the absolute pleasure of going on a gastronomical quest with Robyn! I don’t think I could have possibly created myself someone more enjoyable to roam the area near NYU/Bleeker Street/Astor Place with in search of baked goods and exotic treats sugar-loaded enough to get me fidgity. 😀

We started off by going to the newly-opened location of Cafe Zaiya somewhere near Astor Place (forgive me for my utter lack of awareness as to the location of ANY of these places because I was completely not paying attention how to get there–I was just letting Robyn be my tummy-delighting guide ;]), where I was introduced to the fabulousness that are Japanese baked goods! I tried to let price be my guide during the whole trip, since I wanted to eat things from a variety of places, so I picked something that was only $1.50. This also meant I wouldn’t feel as bad if I wound up not liking it, heh.

Not liking it wound up being completely a non-issue. 😉 “Red bean” and “black sesame” are definitely not ingredients I ever would have thought to put in a sweet food, since to me beans go in things like rice and beans or baked beans or burritos, and sesame is used on breads and chicken, but oh. my. GOD do the Japanese know how to turn them into a delectable dessert.

The flavor of the toasted sesame really rounded out the sweetness of the bun, which being grilled rice flour dough had a mild flavor and really nice chewy-toasty texture without being too crusty/bread-like. It encapsulated the bean paste, which had a really rich flavor without being at all heavy and was perfectly sweet. Yakimochi has so been added to my list of top desserts, yum! :d

After Cafe Zaiya, we roamed some more until we came upon Black Hound Bakery, which we’d previously decided needed at least a stop-in if not tasting. After looking over the prices (too prohibitive for my budget), we settled on just oohing and aahhing at the cute-yummy-fabulous-looking cakes, desserts, bars, truffles, and cookies.

Speaking of their cookies, they had a display of all these tiny cookies that were absolutely the most adorable cookies EVAR. I was compelled to photograph what I am dubbing palmiettes–palmiers that FIT in the palm of your hand instead of being made with it, hee!! XD Too much cute in baked goodies!

After not eating anything from Black Hound, we walked back in the direction we came from to go to JAS Mart and check out their selection of Japanese snacks. Upon deciding I didn’t need a whole big bag of Kasugai gummies despite them being the best gummies on the face of the planet, I bought a small box of Meiji Yogurt Scotch–a yogurt butterscotch candy. Being accustomed to the American type of butterscotch, I was completely not expecting them to be hard candies, so it was quite a shock when I bit down on a piece only to CRUNCH on it. Heh. I did enjoy the balance of yogurty tanginess and butterscotch sweetness very much, though.

Next was a stop in at the downtown Whole Foods so Robyn could show me their assortment of chocolate and honey. I wasn’t interested in spending a ton of money on a chocolate bar or honey, but I definitely do need to expand my honey-tasting-experience well beyond “teddy bear clover from the supermarket.” 😛 BUT! I did find that Egyptian Licorice Tea–which I can’t find near me out on Long Island–so I was like MINE! MINE! MINE! And I bought it. Hee. 😀

Some more ambling through the streets of New York City led us to Amy’s Bread because I was determined to include a cupcake in my eating endeavors of the night, and Robyn assured me they had some there. 🙂 After ogling all of the very tempting baked goodies, I decided that a solitary cupcake was simply not going to do it, so I added on one of the biscotti I spotted on a shelf behind the cashwrap. 😉

I am definitely of the “crispy cookies are what it’s all about” school, so I have long been a fan of biscotti. While I like crispy cookies, I don’t like crumbly cookies, and too often are crispy cookies made thicker and thus crumbly and oh-so-unappealing. However, biscotti are always perfectly crispy-but-also-held-together-y. Yay! And this Anise Almond Biscotto was FANTABULOUS. Ever since trying Yogi Tea’s Egyptian Licorice Tea and being ecstatic over it, I’ve decided that maybe I’m not so repulsed by licorice as I thought and have resolved to try anise-flavored things when given the opportunity. This biscotto was so good, I’ve decided I need to get some anise to add to my spice collection–if only to make anise biscotti! The almonds were perfect as well: flavorful, fresh, and not overly-toasted.

This cupcake (their “Black and White” variety) successfully introduced me to the world of non-mixed-based, canned-frosting-decorated cupcakes, however disappointingly. I have to say the cake was not especially impressive; while the flavor was by far much more intense and well-rounded than cakes baked from a mix, it was very dry and crumbly. I am so not down with the crumbly cakes, nope nope. The frosting, though. Oh, the frosting… At the time I tasted this cupcake, I was in absolute frosting heaven. First of all, there was plenty of it. Thanks in part to the fact that I picked out the one that looked like it had the most, heh. 😉 It was also so perfectly balanced between the butter and sugar–it didn’t at all taste like too much of one or the other, but it was still very sweet. Mmmm!

I also had a small taste of Robyn’s Monkey Cake. It’s a banana-walnut-pineapple layer cake with traditional cream cheese frosting. Like a kicked-up banana bread that’s been frosted. It was good. :]

Once we left Amy’s, we passed a couple of Italian bakeries–one had cupcakes that were oh-so-sadly ICED and not FROSTED. It was declared the So Not Cool Bakery, and we indignantly continued on our Cool Food search. It led us to Pasticceria Bruno with–*gasp*!–Pumpkin-Raisin-Walnut Biscotti summoning me from behind the storefront window. I could not pass that up, and we happily went inside. It was a little anxiety-inducing when I discovered from looking over all of their other dessert goodness that they seemed to price things by the pound. Oh, no! Could I be impeded from my squashy-spicey-fruity-nutty-indulgence by the fact that I would have to buy a GAZILLION all at once?? The horror! BUT. Thankfully, I was able to purchase a single biscotto, and Christ. It was sublime. Officially my Favorite Cookie in the History of the World. I need to find a recipe for such a cookie so I can enjoy this ambrosial treat more often.

Still not full (we are sugar-and-flour-consuming MACHINES, apparently), it was decided that more bakeries were in order! We ventured off and came to the Polka Dot Cake Studio. I wanted to at least check it out, and when I saw amazing-looking cupcakes at the counter, we agreed to split one. 😉 Boy, am I glad we did because their Red Velvet Cupcake more than made up for the disappointment that was Amy’s crumbly cake. It was a very moist and delicious cake that was at least enjoyable in the face of my own red velvet cake, which is oh-so-much better, yes. But Polka Dot’s is good. The frosting really blew me over, though. My God. It was a classic frosting for red velvet cake, cream cheese buttercream, and it was done phenomenally. It didn’t taste quite like a full-blown cream cheese frosting or buttercream–it was somewhere between the two. I enjoyed it because straight buttercream tends to be quite plain, but the slight cream cheese flavor made it just plain perfect. Definitely worth another visit, especially considering the price–while Amy’s was $2.50 for a cupcake, this was just $1.50, and way better. Try it. Now.

Continuing on our way through the streets of the Big Apple, we finally stopped at Magnolia. A person in search of baked goods in New York has utterly failed if only for the sake of visiting Places to See if they haven’t checked out Magnolia, so we absolutely had to go there. At this point, I was definitely on a sugar rush and fidgity, so I really didn’t need any more sweet things, but after sampling a piece of a cupcake with maple buttercream on top, I couldn’t leave without buying something. Conveniently, they had boxes! I could safely take it with me to go home! Woo-hoo! A box was fetched and padded with tissue paper, a yellow cupcake with yellow buttercream and sprinkles was selected, a mini chocolate pecan toffee white chip cookie was also added to the box, and I was set to go. 🙂

At this point, it was after nine and we’d been adventuring for nearly four whole hours, so it was time for us to go in the direction of our respective homes. Good-byes were said, and I was off to the train. During the train ride, I came down from my sugar high and was too tempted by the memories of the goodness of the sample, and so needless to say, the Magnolia treats did not survive the trip home. 😉 That cake is so perfect–the texture is moist and fluffy-but-dense, with a crispy-buttery top that is absolutely delightful, and the flavor is vanilla-y and buttery without being too rich. The frosting is more impressive with maple, though. Their plain buttercream is basically just SWEET. It’s certainly not bad, but I definitely prefer some sort of taste in my frosting beyond sweetness.

The cookie wasn’t crispy, so that was one small point against it. It wasn’t chewy either, though, so that was better. “Fudgy” is the best way to describe the texture, almost brownie-like, and I do like fudge and brownies, so I was okay with it. 🙂 The flavor, on the other hand, was definitely delectable. The combination of chocolate cookie with pieces of toffee, chopped pecans, and white chocolate chips was so amazingly good. Definitely something I am going to make in crispy-cookie form, oh yes.

To wrap up this excessively long entry, my fooding adventures were a blazing success! Robyn and I enthusiastically agreed we will have to do it again sometime during the winter, and next time we’ll include “real” food and not just desserts. 😉 Today, I am so not in the mood for sugary stuff, heh…

I absentmindedly wound up leaving my camera at my dorm room when I came home this weekend–d’oh!–so I used my camera phone. That explains the not-so-good quality of my photos and the lack of documentary after Amy’s (darn lack of memory…). For more photos, check out Robyn’s web site (linked in the first paragraph) and her Flickr gallery.

3 thoughts on “Fooding Adventures in the Village”

This site uses Akismet to reduce spam. Learn how your comment data is processed.